One of the most energy efficient high schools in the nation

Located in one of the fastest-growing school districts in Lexington, Kentucky, Frederick Douglass High School was designed and built to be the district's first Zero Energy Ready facility and operate as the most energy-efficient high school in the state. The two-story, 287,125 SF facility operates at an EUI of 18.3 kBtu/SF - representing a 60% savings over Energy Star's K-12 average. 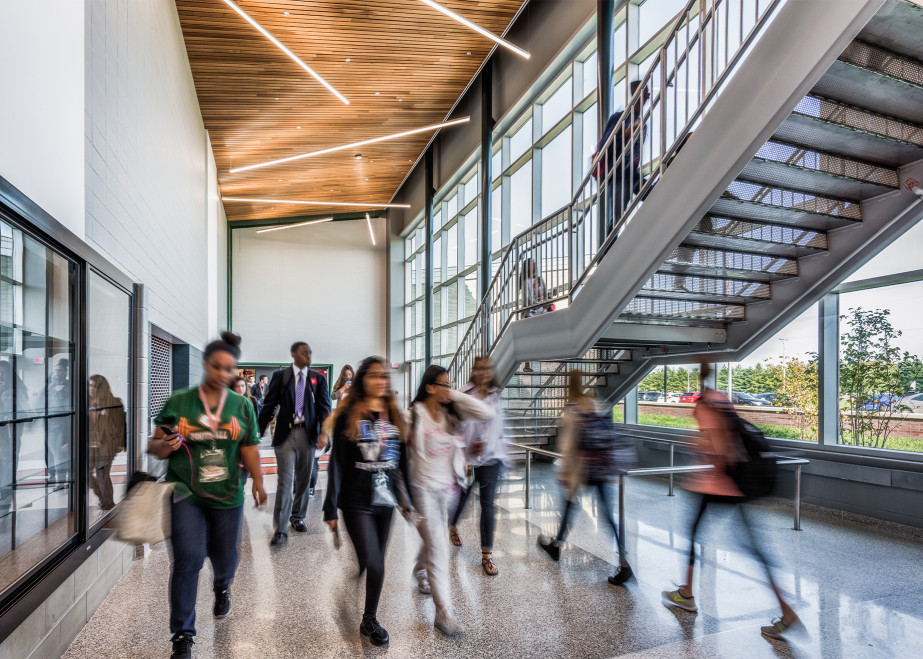 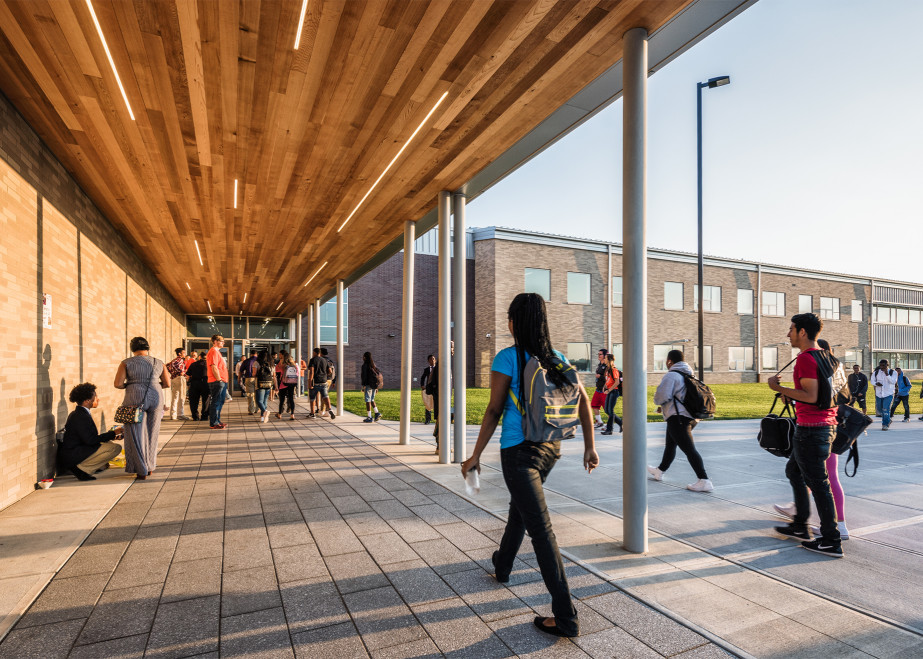 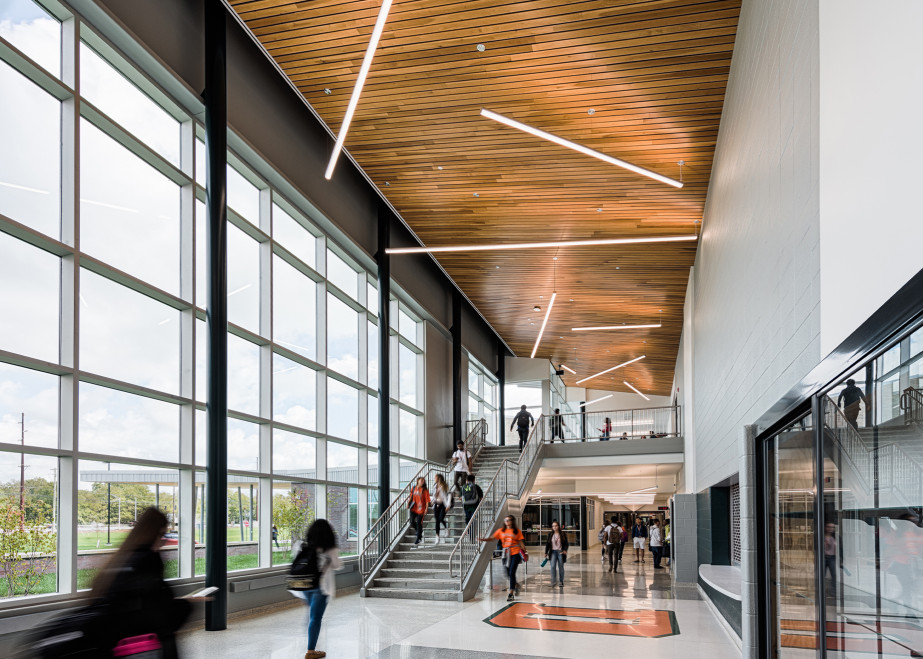 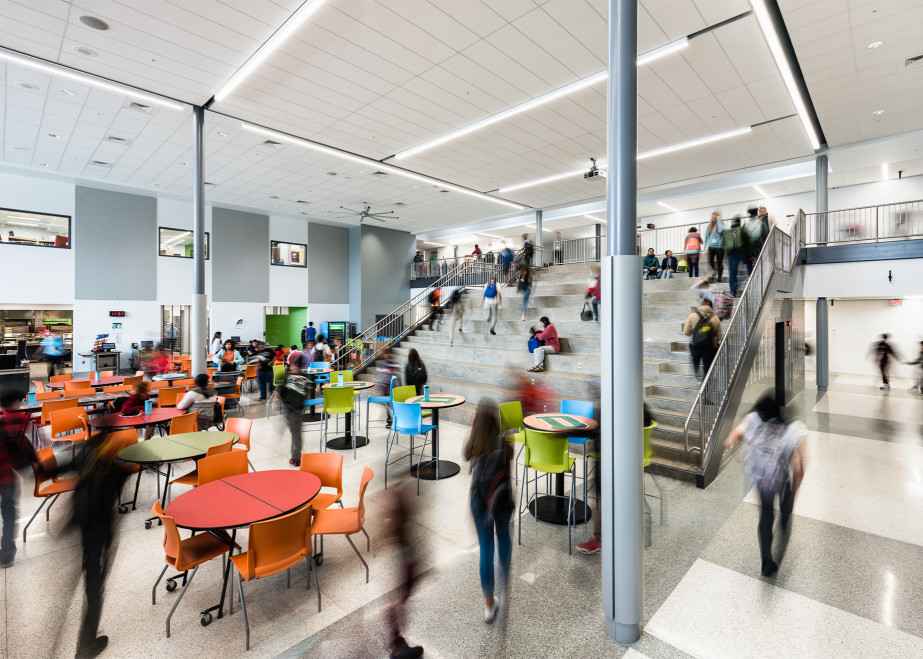 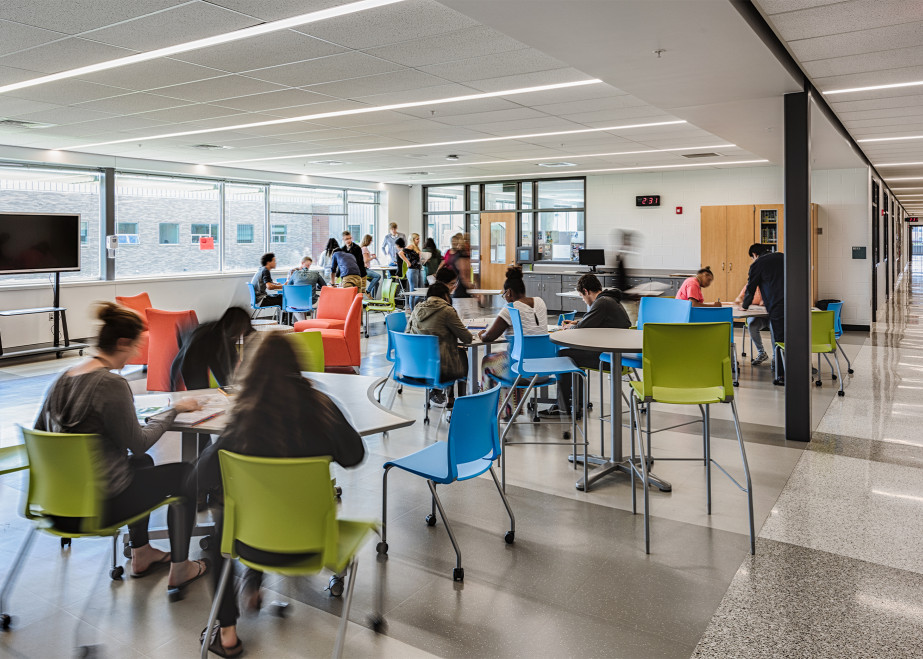 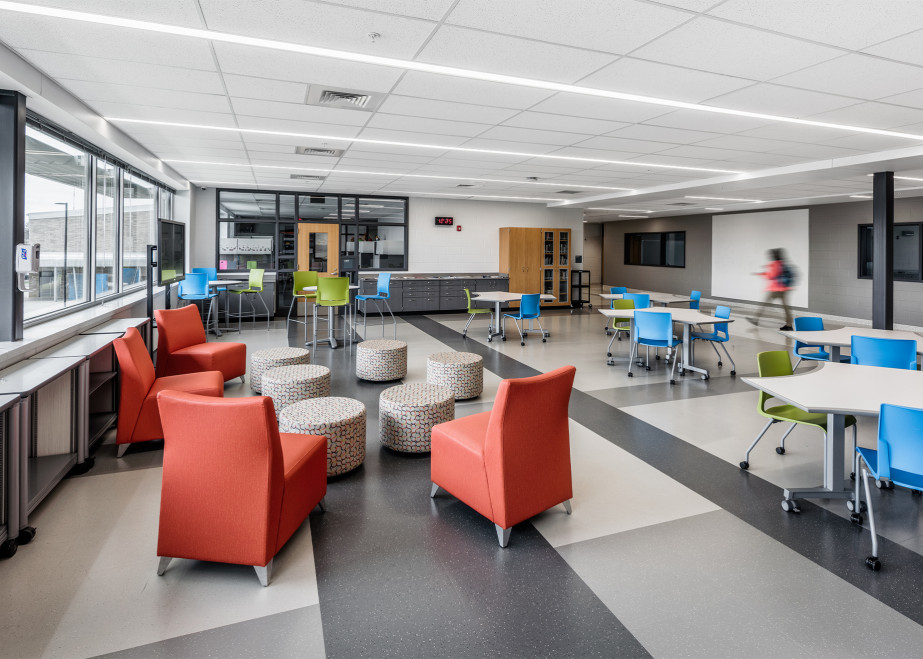 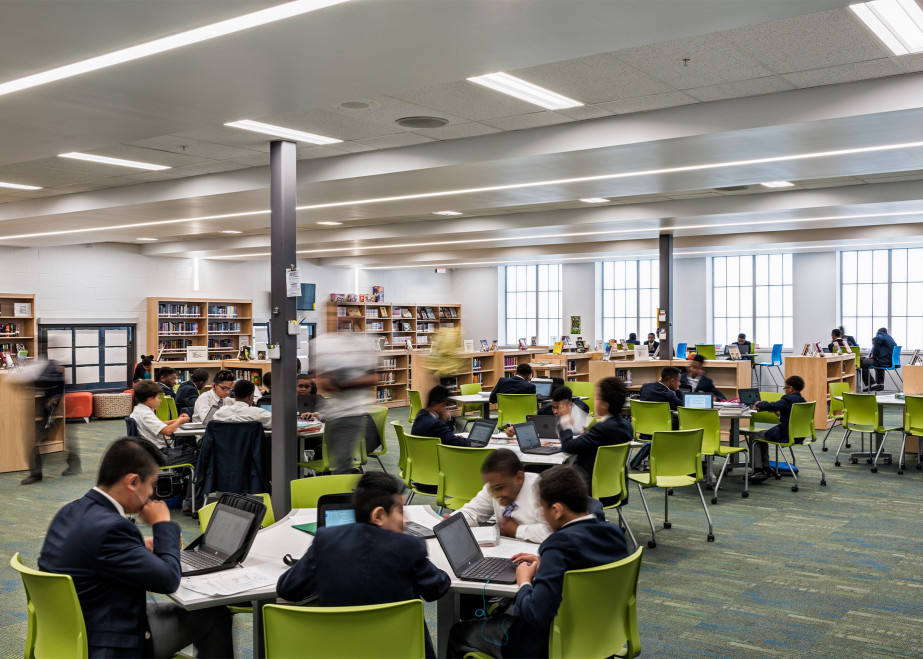 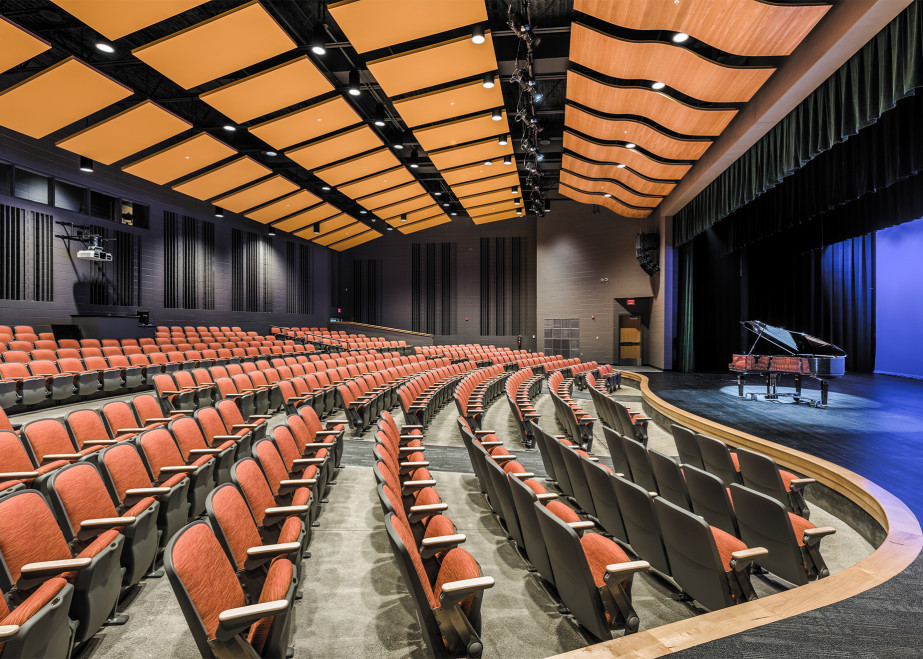 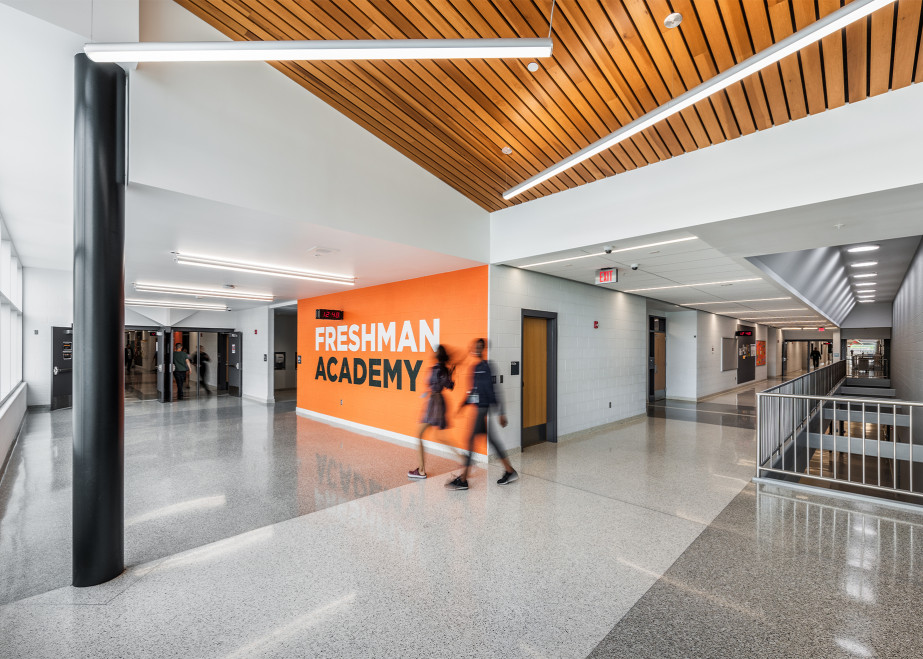 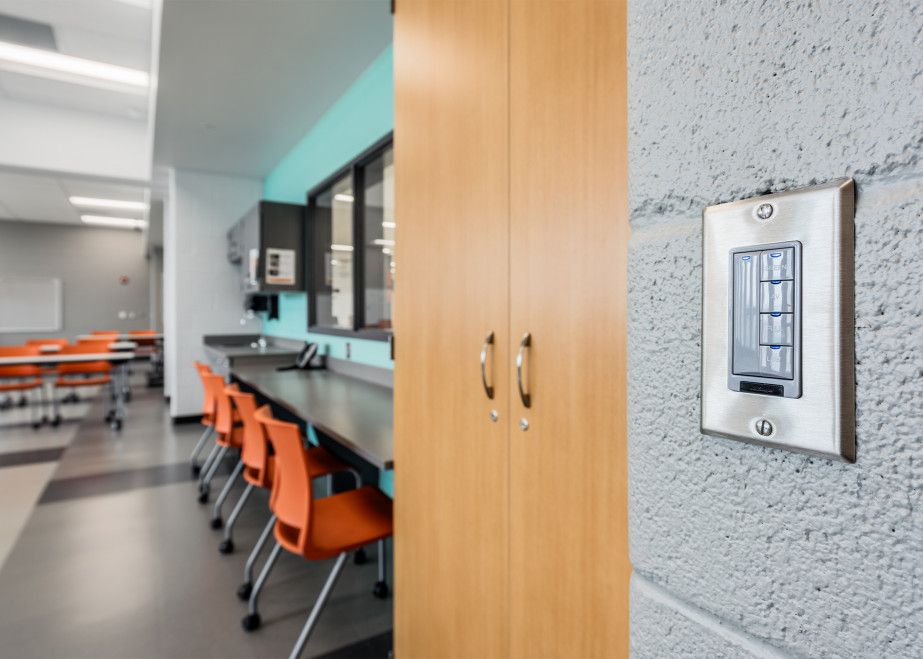 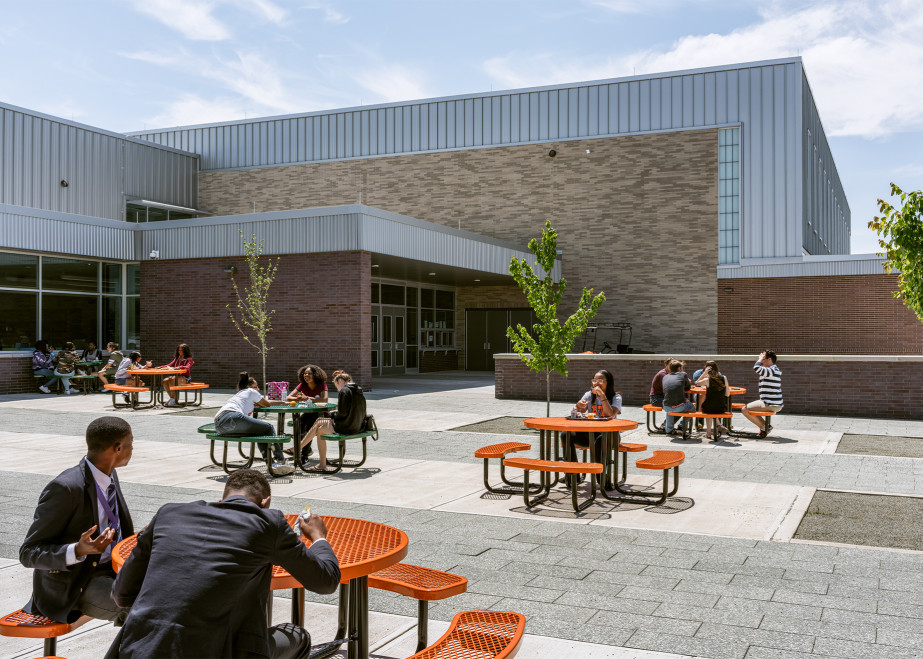 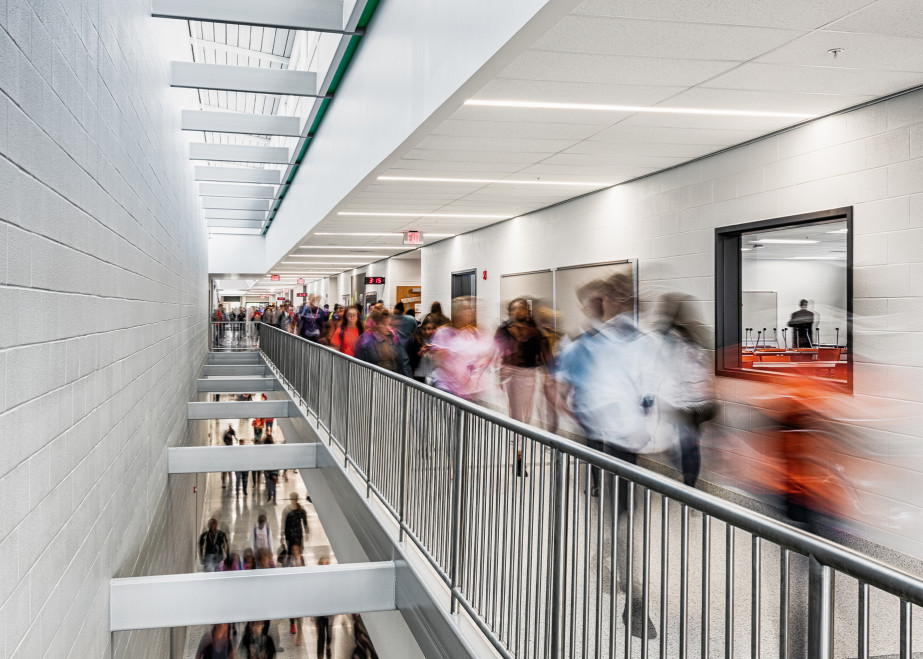 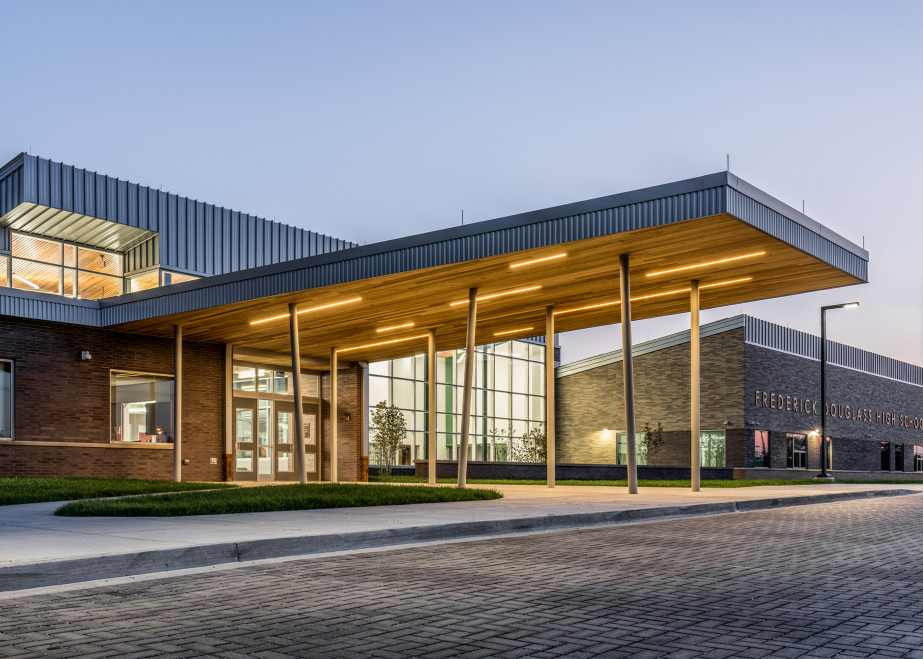 High-volume low-velocity fans enhance air circulation in the gymnasiums and two-story cafeteria. Air velocity is increased in the summer to assist convective cooling allowing for savings in compressor energy due to higher thermostatic setpoints that maintain a comfortable indoor environment. In the wintertime, the fans de-stratify the spaces generating a more uniform temperature profile in high volume spaces allowing for heating savings.

A geothermal water-to-water heat pump produces domestic hot water. The hot water recirculation pump is turned off during unoccupied hours to reduce heat loss through the piping. The kitchen cooler and freezers do not have conventional air-cooled condensing units, but rather utilize the geothermal well field to reject condenser heat.

Frederick Douglass High School's available roof space will be able to host solar photovoltaic panels to offset the school's energy usage by 50% (at a minimum). Shortly after the school was occupied, the school district enacted new security protocols, one of which involved screening all students through metal detectors as they enter the school. This required that exterior doors in multiple locations be held open for an hour each morning as students lined up for screening. The occupants complained of high temperatures and humidity every morning, so the design team investigated. After reviewing several space temperature trends, they found that the screening process was allowing the building temperature to spike right before the building went into the occupied mode. An adjustment was made to enter occupied mode thirty minutes earlier, resolving the comfort issue.

Each classroom has a "green button" as part of the lighting controls to minimize energy consumption. Teachers and students can select this button to reset the classroom lighting level from 50 footcandles to 30 footcandles – ultimately reducing illumination. It also widens the room temperature dead band by 2°F (1.1°C) up and 2°F (1.1°C) down. This meets the Kentucky Department of Education building design guides while allowing the staff and students to become part of the energy-saving initiative.

First 30: This design approach allowed the design team to creatively and collaboratively achieve innovative solutions at an early stage. Internal charrettes on energy and wellness were expanded to all the stakeholders to create an integrated high-performance design.

Data-Driven Design: We utilized past performance for energy consumption in CMTA office designs to inform the design process and conservation measures to implement. Models are great, but they don't provide evidence to evaluate our success and improve our systems.

Shortly after commissioning was complete and the building became operational and occupied, the design team worked to optimize the building's performance. Actual building use was observed and documented, which allowed for fine-tuning of occupancy schedules. Ventilation air delivered to spaces was monitored and trended in categories such as leaving air temperature, humidity, zone air temperature, and volume delivered. This trending and subsequent analysis allowed the design team to make energy conservation adjustments to the ventilation unit's operation to enhance energy savings. Geothermal pumping was monitored to further tune the base mounted pumps' differential pressure setting serving the 287,125 square foot facility.

Ultimately, the differential pressure setting was reduced, and the pumps optimally served the building hydronic demands.

CMTA was thrilled to partner with Fayette County Public Schools to achieve a Zero Energy milestone for the Kentucky school district. Our tried-and-true innovative solutions guided the design team and owner throughout the design and construction process, ensuring the facility will meet the school's Zero Energy and sustainability goals.

Energy-efficient approaches, like geothermal heating, demand-controlled ventilation, and high volume low-velocity fans (and in the future, a roof-mounted solar array), keep operational costs for the 21st-century prototype school within budget. The past 12 months' utility cost has been $0.58/ft2 ($6.24/m2), which is the lowest cost of any Fayette County Public Schools high school. The outside air, LED lighting, and window glazing systems were also design options that the design team considered to ensure initial cost and utility costs were minimized.

Excellence in Planning and Design

A New High School on a Busy Campus

CMTA's Commissioning Team Transformed a School Designed at 20.3 EUI into a School Performing at 13.8 EUI